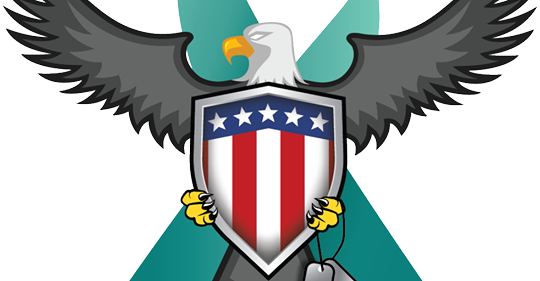 After over 17 years in the Army, Gene Bryant was faced with the most personal battle of his life when he returned home. Gene struggled with making the transition from active duty to life outside of the military and was diagnosed with post-traumatic stress disorder and depression. Gene reports he also struggled with access to the mental health care he needed, and through conversations with other veterans learned that on average there is a 120-day waiting period for access to counseling services. Gene knew he needed to do something to help, and in 2017 he and his wife Raina founded the non-profit organization, Battle Buddy 4 Life.

Battle Buddy 4 Life has helped save the lives of veterans nationwide by ensuring that they have access to counseling services within 72 hours of reaching out for help. Any veteran struggling with suicidal thoughts, depression, and post-traumatic stress disorder can qualify for the service. Due to his experience, Gene understands the need for more urgent care to help with the mental health of these veterans at risk. He has partnered with counseling centers all over the United States, many reporting to him that they are honored to be a part of his mission. 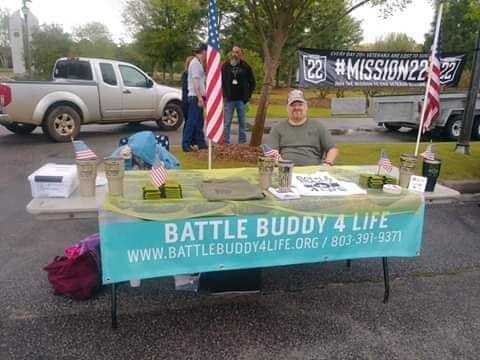 Not only is this amazing organization saving the lives of veterans, it has also saved Gene. It’s given him a sense of purpose, knowing that every day, he is making a significant difference in the lives of others. “Our motto is ‘Never leave a veteran behind; for we are our brothers and sisters’ keeper!’ We live up to that,” says Gene. 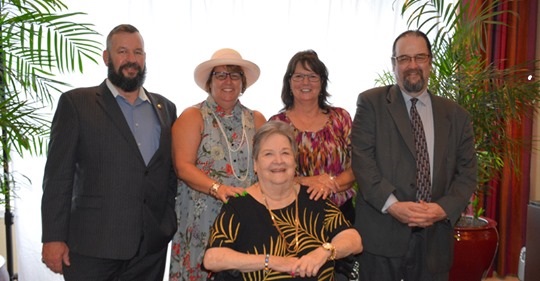 Shirley Riley (front) with four of her six children. From left to right: Jamie, Tracey, Kelly, and Brian (Erin and Shown not pictured).

In a matter of minutes, Jamie, Kelly, Tracey, Erin, and Brian went from being typical adult children with busy lives to caregivers for their mother when she suffered a broken ankle from a fall. Their mother, Shirley, went from being a vibrant, independent adult to needing help. She broke her ankle so severely that she received a cast and had to spend a short time in an in-patient rehabilitation facility.

Shirley’s daughter, Kelly, recounts that the stay in the facility was easier logistically for the family, but it was a good day when her mother got to go home. “It was good to take Mother home where she is comfortable and where she belongs, but then we had to figure out how to take care of all of the responsibilities of her care, and she was still in a wheelchair,” Kelly recalls. While Shirley is fortunate to have five adult children that jumped in in various ways to help with her care, only one of them, her oldest daughter, Tracy lives nearby in Columbia, so getting Shirley to and from her medical appointments quickly became an issue as she slowly recovered. That’s when Shirley’s son, Jamie, reached out to GetCareSC, an online resource guide offered by the South Carolina Office on Aging for seniors, caregivers, and adults with disabilities, for help and learned about the AARP Ride@50+ Program.

Right from the start, Shirley’s children could tell they were in good hands after their first phone call with a Ride@50+ Program call center agent. “It’s good to know that people understand where you are coming from. I have been put in a position where I was unfamiliar with the place, unfamiliar with the situation, and I had to figure it all out to take care of my mother,” said Shirley’s daughter, Kelly, who temporarily moved to Columbia from Florida to help Tracy with her mother’s care. “Between not knowing specific addresses or how long it would take to get some place or the instructions that a driver would need for finding the entrance, I was kind of lost, but [the agent] always looked that stuff up for me… All I had to do was call, and the ride was there.”

One of the things the children liked about the transportation service was that they got to ride along with their mother. While they now know that the drivers are great people, Kelly was nervous at first about sending her mother with a stranger. Kelly commented that she was more cautious with arrangements for her mother than she would have been for herself because “You always want the best for your mom. If mom’s happy, everyone is happy.” Plus, she wanted to be there for her mother during the appointments. Kelly rides with her mother every trip and she is impressed with the way her mother is treated, including helping Shirley out of the vehicle and to the door at her drop-off location.

Because of their satisfaction with the AARP Ride@50+ Program, her kids did not hesitate to book a ride for Shirley to get out of the house and enjoy a movie and have her nails done, a much-needed respite from the focus on the ankle injury.

As an added bonus, Tracey and Jamie said that they “really appreciated the text message alerts that came confirming mom’s trips.” Shirley certainly did not intend to spend a couple of months in a wheelchair, and she looks forward to the day she graduates from the wheelchair into the easier to navigate boot, but Shirley and her children appreciate that life did not stop because of her accident. She found a way to get around while managing her new wheels of a different sort. Shirley and her family can say with confidence that any caregiver looking for transportation should check out the AARP Ride@50+ Program because it’s quick, easy, and you’ll always be treated with kindness! 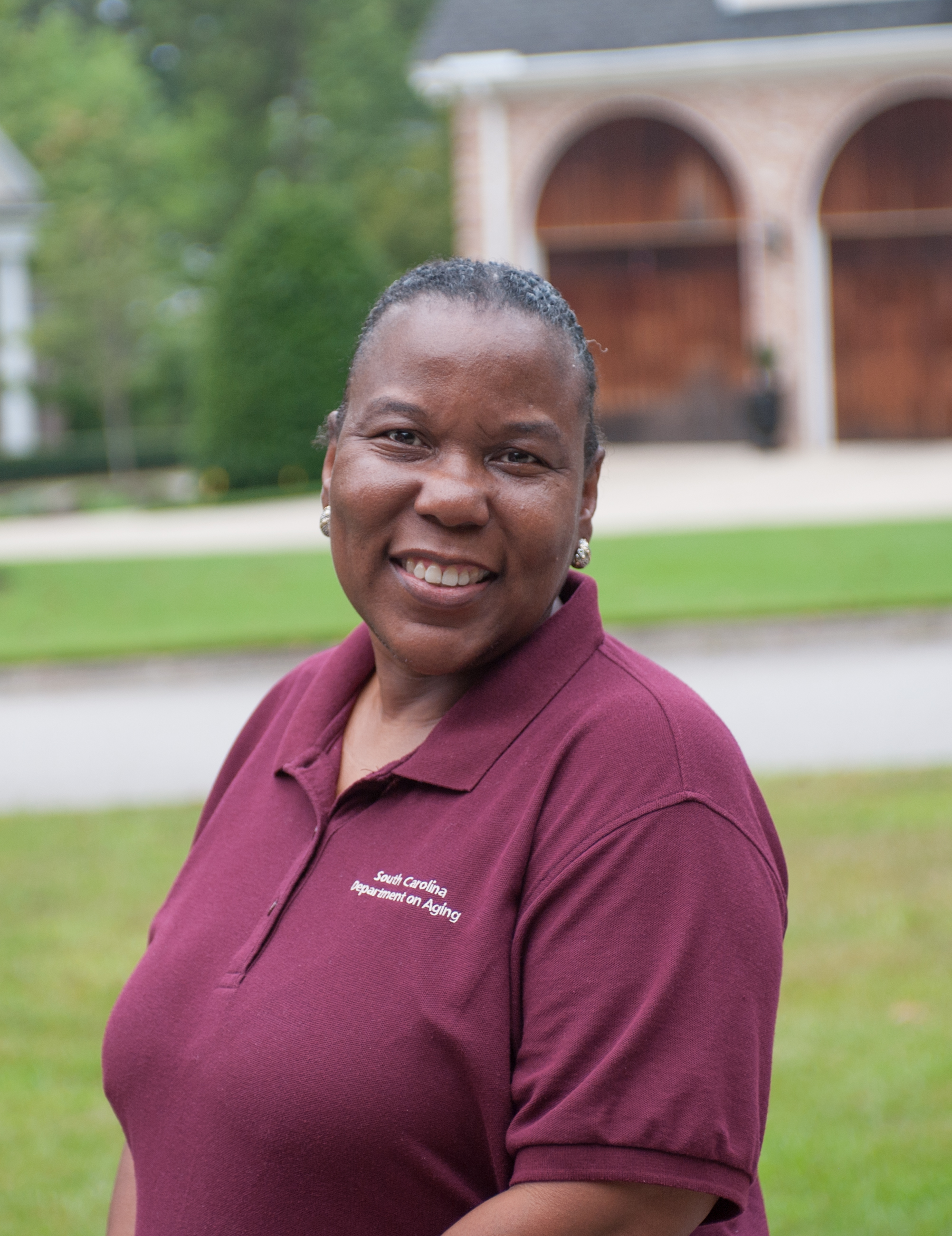 Kay Hightower from the South Carolina Department on Aging.

On any given day Kay Hightower, Manager of the Supportive Services & Outreach Unit with the South Carolina Department on Aging (SCDOA), can be found at her desk or around a board room table discussing ideas and policies that will enhance the quality of life for seniors in South Carolina. From her office window on the third floor of the Gervais Street office building in Columbia, Kay overlooks the city that she has called home for the past 15 years. In 2004, Kay relocated to Columbia from New York City to “escape the cold and enjoy life in the Palmetto State.” She quickly became involved with the SCDOA and has been enhancing the quality of life for seniors in South Carolina, through its services and outreach, for the past four and a half years.

The SCDOA administers federal funds received through the Older Americans Act and the State of South Carolina. As the State Unit on Aging (SUA), SCDOA funds regional Area Agencies on Aging, which in turn contract with local providers for services such as meals, transportation, home care services, respite, and health promotion programs.

“As baby boomers age, our state’s older population is growing rapidly and there aren’t enough services to meet the demands. The senior population is expected to double by 2030 to 1.8 million, over 11% of our state’s seniors live in poverty, and over 55% of people over 55 have less than $50,000 saved for retirement” says Kay. “Ignoring our older citizens and neglecting their needs leaves an unforgivable scar on our society.”

In 2017, the SCDOA launched getcaresc.com, a website and phone accessible platform dedicated to matching seniors with available resources for things like adult daycare and senior centers, meal delivery, medical equipment, and transportation. Through this program and the relationship between SCDOA and the AARP South Carolina State Office, Kay learned about the new AARP Ride@50+℠ Program, which first launched in Columbia in late 2018.

“We provide support and resources for programs that help aging citizens and adults with disabilities live independently” says Kay. “The AARP Ride@50+ Program offers a simple, affordable and efficient one-stop-shop solution to finding multiple modes of local transportation alternatives, which is directly aligned with our mission of helping older South Carolinians live fulfilling and independent lives. Teaching seniors that there are options such as public transportation, paratransit, ridesharing, volunteer drivers, and even bikes available in Richland and Lexington counties opens the door to independence.”

Kay’s commitment to providing care solutions for seniors has led her to a deep involvement within the community. In early 2019 she joined the AARP Ride@50+ Program Mobility Leadership Circle, an active committee of local community and transportation industry leaders committed to transforming transportation options and availability within the Columbia area. Kay is a driving force for examining existing policies and advocating for change.

Sign up for our newsletter to stay up to date on the Ride@50+ Program and learn the latest about local transportation options.